Summer reading break is nearly over and it's time to announce the next book for the Open Democracy Book Club on September 15 at 7 pm Eastern!    Authors Frances Moore Lappé and Adam Eichen have confirmed they will attend.

Daring Democracy: Igniting Power, Meaning, and Connection for the America We Want by Frances Moore Lappé and Adam Eichen will be the selected title for September's meeting.  This intergenerational duo opens with an essential truth: It’s not the 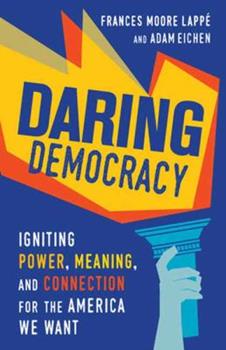 magnitude of a challenge that crushes the human spirit. It’s feeling powerless—in this case, fearing that to stand up for democracy is futile. It’s not, Lappé and Eichen argue. With riveting stories and little-known evidence, they demystify how we got here, exposing the well-orchestrated effort that has robbed Americans of their rightful power. But at the heart of this unique book are solutions. Even in this divisive time, Americans are uniting across causes and ideologies to create a “canopy of hope” the authors call the Democracy Movement. In this invigorating “movement of movements,” millions of Americans are leaving despair behind as they push for and achieve historic change. The movement and democracy itself are vital to us as citizens and fulfill human needs—for power, meaning, and connection—essential to our thriving. In this timely and necessary book, Lappé and Eichen offer proof that courage is contagious in the daring fight for democracy.

Frances Moore Lappé, author of the multimillion-selling Diet for a Small Planet and seventeen other books, is a recipient of the Right Livelihood Award, the “Alternative Nobel.”

The book is out of print, but can be ordered by your local bookstore: Gibsons, Toadstool, Water Street Books.  Or on Amazon.

Available in paperback or compact disk.