Welcome to a project working to draw fair voting district maps for New Hampshire!  The Map-a-Thon is supported by a coalition of NH groups who work for fair voting maps, including Granite State Progress, the League of Women Voters of NH, Open Democacy, Open Democracy Teams, and the Kent Street Coalition.

Learn the Basics About Redistricting 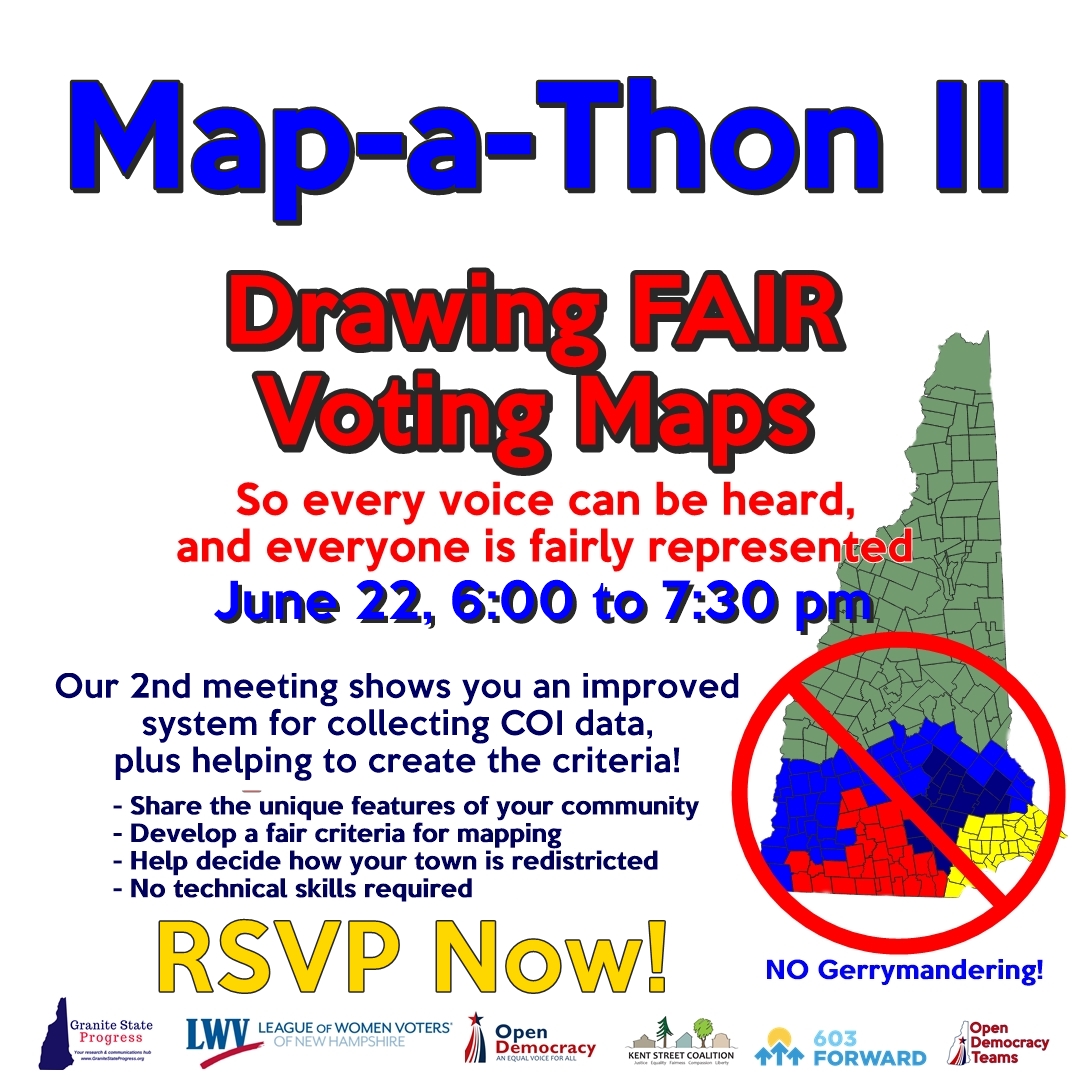 Fair Redistricting Workshop --  This July 26, 2021, 70-min workshop on YouTube delves into the building blocks of fair redistricting in New Hampshire, and was designed to help legislators, the press and the public understand the unique and challenging aspects of redistricting in the Granite State.   https://youtu.be/lWVWNsVF-8E

An Overview for Redistricting  -- The Brennan Center at NYU is a leading authority on redistricting policy.

Volunteer to Help or Take Action

One of the cornerstones of fair redistricting includes "Communities of Interest," which are issues, shared resources, and cultural ties which bind communities and neighborhoods together.   Proper voting districts keep these communities together whenever possible.   See the original survey used to collect data https://forms.gle/jt36TdDWZxRJ89yz7\

In New Hampshire, our Constitution is vague as to how new voting districts should be apportioned every 10 years, as the U.S. Constitution stipulates.  Unlike other states with independent, nonpartisan commissions drawing the lines, committees are formed by the NH Speaker of the House and the NH President of the Senate.  These committees reflect the partisan makeup of the whole body, which in the House in 2021 is 8 Republicans and 7 Democrats.   In 2011, this process was done largely behind closed doors by the majority, with little input from either Republican or Democrat members, and what input was given by the public was ignored.   As a result, Executive Council, Senate and House districts were all manipulated for partisan purposes.

During Map-a-Thon I through III, the volunteers in the Map-a-Thon facilitated acquiring "Communities of Interest" data from towns around NH, then prioritized those communities of interest to guide the smaller mapping and tech team comprised of engineers, database specialists and GIS mapping experts.

In preparation for mapping, the mapping and tech team took the process further by learning the U.S. and NH Constitutional requirements, the NH Supreme Court Law, and the statute and non-statute requirements and customs.   The NH Constitutional requirements, a 2006 amendment, the large number number or reps and other factors make meeting the Constitutional mandates for the NH House make it particularly difficult.  However, Map-a-Thon volunteers have made significant advances without gerrymandering, in stark contrast to past efforts of the Special Committee on Redistricting.

Before you review the maps

There are a few things for you to know about the challenges of drawing voting district maps in New Hampshire.   Some of these challenges have also been used to hide manipulation of districts for partisan advantage, so Granite Staters should understand how the process works.