Although New Hampshire has long prided itself on its old-fashioned brand of personal politics, the cost of electoral campaigns has increased rapidly in recent years with the removal of restrictions on independent electioneering spending. In response to the unprecedented threat of independently-funded attacks, candidates in New Hampshire must devote a large and growing share of their time to raising money from wealthy contributors and special interest groups. A fraction of one percent of the state’s population now provide the lion’s share of campaign funds, which routinely top six figures for state senate and executive council candidates, and seven figures for gubernatorial and congressional candidates.

The following analysis covers state and federal elections in 2014, with historical comparisons offered from 2004-2014; spending data for New Hampshire’s municipal elections is not uniformly reported or publicly accessible.

New Hampshire candidates for state and federal office, and outside organizations supporting or opposing their candidacy, spent a record-breaking $106 million in 2014, more than twice the total spent in 2012. More than half of the total amount, $60 million, was spent by “independent” political committees seeking to elect or defeat candidates, not counting additional electioneering expenditures that were undisclosed, in violation of state law. (28) Approximately 80% of outside spending in 2014 was used to run negative attacks and New Hampshire’s U.S. Senate contest ranked among the most negative in the country. (29)

The cost of running for and winning public office has risen dramatically in New Hampshire and across the country in recent years. Funding for candidates for state office is estimated at $9.5 million in 2014, up from $8.5 million in the open gubernatorial election of 2012 and $6.2 million in the last mid-term election of 2010. The majority of those funds, $5.1 million, was spent on the incumbent gubernatorial election. Meanwhile, funding for federal candidates in New Hampshire hit an all-time high of $35.6 million, with $26.7 million spent on the U.S. Senate race and $8.8 million spent on the two congressional races. Although many residents voice objections to the high cost of political campaigns, normative standards do not exist for evaluating campaign spending levels and grades are therefore not assigned.

Figure 11: Ratio of Candidate vs. Outside Election Spending by New Hampshire Races, 2014

3.2 Source and Concentration of Campaign Funds

Analysis of official 2014 campaign contribution records by New Hampshire residents reveals that in-state individuals and businesses gave a total of $11.1 million to state and federal candidates in New Hampshire.  These donations came from an estimated 15,704 individuals representing 1.5% of the state’s voting-age population. (31) Most donors contributed small amounts while a small subset of the donor population accounted for the majority of campaign funds. The extremely low level of donor participation as a share of the adult population is graded F (less than 10%), where 40% or more donor participation corresponds to a grade of A, 30-39% B, 20-29% C, and 10-19% D. The grading scale is halved to account for the higher cost on citizens of contributing to political campaigns relative to voting or volunteering.

Campaign contributions also tend to be highly concentrated among private-sector donors. According to official campaign finance disclosures submitted by the campaigns, more than three-quarters of the total contributions for which sector information was provided in 2014 came from corporations or individuals working for private for-profit entities. One-third of the total reported contributions came from the top two sectors of finance/insurance/real estate sector and lawyers/lobbyists, followed health and miscellaneous business at 25%. By contrast, individuals and nonprofit organizations working across a broad range of public-sector and non-profit fields like education, health, and the environment accounted for 9% of campaign contributions, ideology and single issue groups accounted for 5%, and labor unions accounted for 8%. (33) Grades are not assigned due to the absence of a normative standard for sourcing of campaign funds.

Contributions from out-of-state donors represented a significant share of both candidate and PAC fundraising. Approximately 27% of the money raised by state candidates and 69% raised by federal candidates came from out-of-state donors for a combined average of 53% (weighting state and federal races equally to offset the disproportionately high spending level in federal races). (34) This preponderance of out of state money results in a grade of C for state and federal races, where A corresponds to less than 20% of money from out of state, B corresponds to 20-39%, C to 40-59%, D to 60-79% and F to 80% or more. 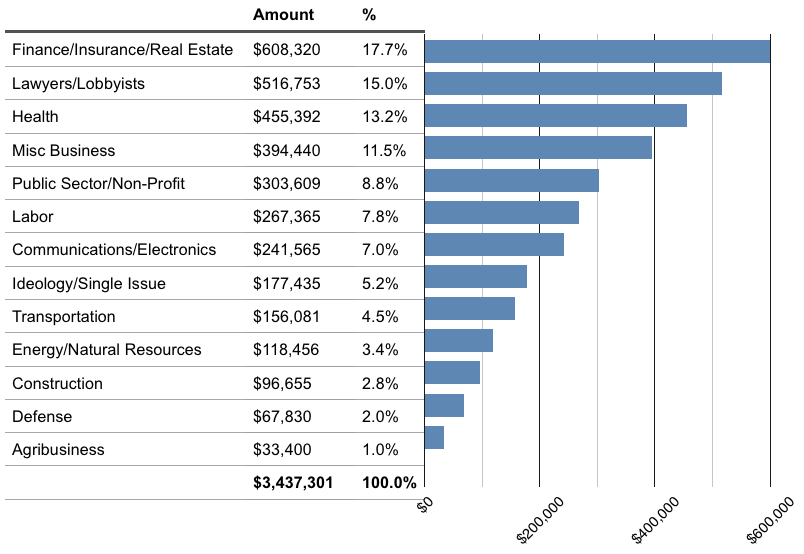 The high degree of donor and recipient concentration appears to negatively impact the attitudes of ordinary citizens toward politics. One in four citizens surveyed say they are less likely to vote because big donors have “so much more influence over elected officials than average Americans” and 41% believe their votes don’t matter very much for the same reason. (35) Among less educated and lower income voters, the rates climb to a third and half, respectively. (36)

Electioneering spending by outside groups was even more concentrated than candidate contributions. Of the more than $10 million spent by “independent” political committees to elect or defeat state candidates in 2014, fully 90% of the funds were spent by the top 28 groups and over half of the money was spent by just three. Compliance with expanded disclosure requirements for independent spenders was incomplete; weeks after the post-election filing deadline for final disclosure reports, 25 PACs had yet to file their reports, including two of the largest spenders. Following the donor concentration grades established above, with the majority of independent expenditures coming from just three (1.9%) PACs, the concentration of PAC spending receives a grade of F.

Spending by independent groups in New Hampshire state elections rose dramatically in the wake of the 2010 Citizens United decision, with most of the new spending coming from committees based outside of the Granite State.  Independent spending increased nearly threefold between 2010 and 2012, jumping from $7,252,794 to $19,582,218.  While only a quarter of the money in 2010 came from groups based outside of New Hampshire, in 2012 61% of the independent expenditures came from out-of-state groups.

(28) "2014 Outside Spending, by Race." OpenSecrets.org. Center for Responsive Politics, 27 Mar. 2015. Available at https://www.opensecrets.org/outsidespending/summ.php?disp=R. Open Democracy obtained evidence of additional independent spending in the 2014 not disclosed with the Secretary of State, in violation of state law, and filed a complaint with the New Hampshire Attorney General. As of July 13, 2015, the AG has not completed an investigation.

(29) Brady Carlson, “Despite Upturn In Tone, Shaheen, Brown Race Remains "One Of The Most Negative" In The Country,” New Hampshire Public Radio, 30 Oct 2014, available at: http://nhpr.org/post/despite-upturn-tone-shaheen-brown-race-remains-one-most-negative-country

(30) The fundraising totals for state house candidates for 2012 and 2014 are estimated using the average rate of increase of the previous two election cycles, for which complete data are available. The reported fundraising by state house candidates totaled just $87,052 in 2012 and $51,644 in 2014, a function of insufficient reporting by candidates or disclosure by the Secretary of State. As US Senate elections did not occur in New Hampshire in 2006 or 2012, the values entered are averages of the surrounding years for graphing purposes; the Senate high of 2014 is $26.7 million.

(32) As a point of reference, Haiti, the nation with the world’s 7th-highest income inequality, has a Gini coefficient of 0.592.

(33) Sector-level campaign contribution data does not include uncoded contributions for which no employer/sector information was provided, candidate self-funding, party contributions, or contributions from retirees no longer employed in a given sector.

(34) Approximately 8% of campaign contributions to state candidates did not contain the required information on donor location.

(37) It is likely that some of this drop-off in independent spending between 2012 and 2014 can be attributed to the rising prominence of 501c4 “dark money” groups, who are not currently required to disclose their federal spending by the FEC.