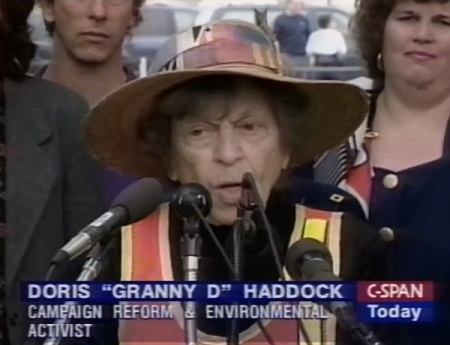 The Coalition for Open Democracy is a nonpartisan 501(c)(3) organization founded in 1997 by a group of campaign finance reform activists, including the legendary Doris "Granny D" Haddock.

Our mission is political equality for all in New Hampshire and the United States. We work to stop the influence of wealthy interests in politics, ensure fair redistricting, and protect the freedom to vote. We envision a government accountable to the people, free from the corruption of big money politics.

Open Democracy works across partisan lines to educate and advocate for public funding of campaigns. Here in New Hampshire, voters of all political ideologies are concerned about donor influence: eight-out-of-ten of us believe special interests have more influence than voters. Almost two-thirds of voters support a system of public campaign funding to eliminate the influence of Big Money in state elections -- including 50% of Republicans, 68% of Independents and 70% of Democrats.