On February 29, 2000, Doris "Granny D" Haddock spoke at the U.S. Capitol Steps, flanked by Congressmen and Senators of both parties.   She had just arrived after her 14-month, 3,200 mile walk, and had recently had her 90th birthday on January 24th.

Ms. Haddock’s remarks, were delivered on the East Steps of the U.S. Capitol to the 2,300 people who walked the final miles with her.  After welcoming remarks by many members of Congress and reform leaders, Doris came to the microphone and shared these words:

Thank you. Before the days of the Civil Rights Movement, a senator might have said that the millions of 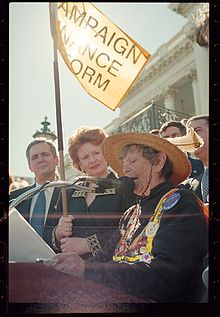 Before the rise of the Environmental Movement, a senator might have looked upon a polluted Hudson River and said that the old river is simply paying the inevitable price for progress. But now, after so much sickness endured, so much new understanding gained of our fragile network of life, and after so much effort by so many, we see the insensitivity and ignorance of such a statement. How did anyone dare think that our beautiful land stretches itself out for companies to ravage for their profit and our misery?

Before the Campaign Finance Reform Movement, which grows every day now with such power that it shakes the political parties to their foundations, a senator might have advised his fellow member to not worry about voting down campaign reforms, because the people don't care. That is, in fact, what Senators McConnell and Lott did say—and that is what precipitated my walk. I have come to tell them that they are wildly mistaken, and I am glad to have you along to add your voices to mine.

This morning we began our walk among the graves of Arlington so that those spirits, some of whom may be old friends, might join us today and that we might ask of them now: Did you, brave spirits, give your lives for a government where we might stand together as free and equal citizens, or did you give your lives so that laws might be sold to the highest bidder, turning this temple of our Fair Republic into a bawdy house where anything and everything is done for a price? We hear your answers in the wind.

What might we call the selling of our government from under us? What might we call a change of government—from a government of, by and for the people, to a government by and for the wealthy elite? I will not call such a change of government a treason, but those more courageous shadows standing among us, whose blood runs through our flag and our history, and whose accomplishments are more solid beneath us than these stone steps, why they might use such a word in angry whispers that trace through the polluted corridors of this once great Capitol and slip despairingly through the files of correspondence and receipts in this city of corruption.

Senators, we speak for these spirits and for ourselves: No, you may not have our democratic republic to sell. What our family members died for, we do not forget. They died for our freedom and equality, not for a government of the rich alone.

Along my three thousand miles through the heart of America, which I made to disprove your lie, did I 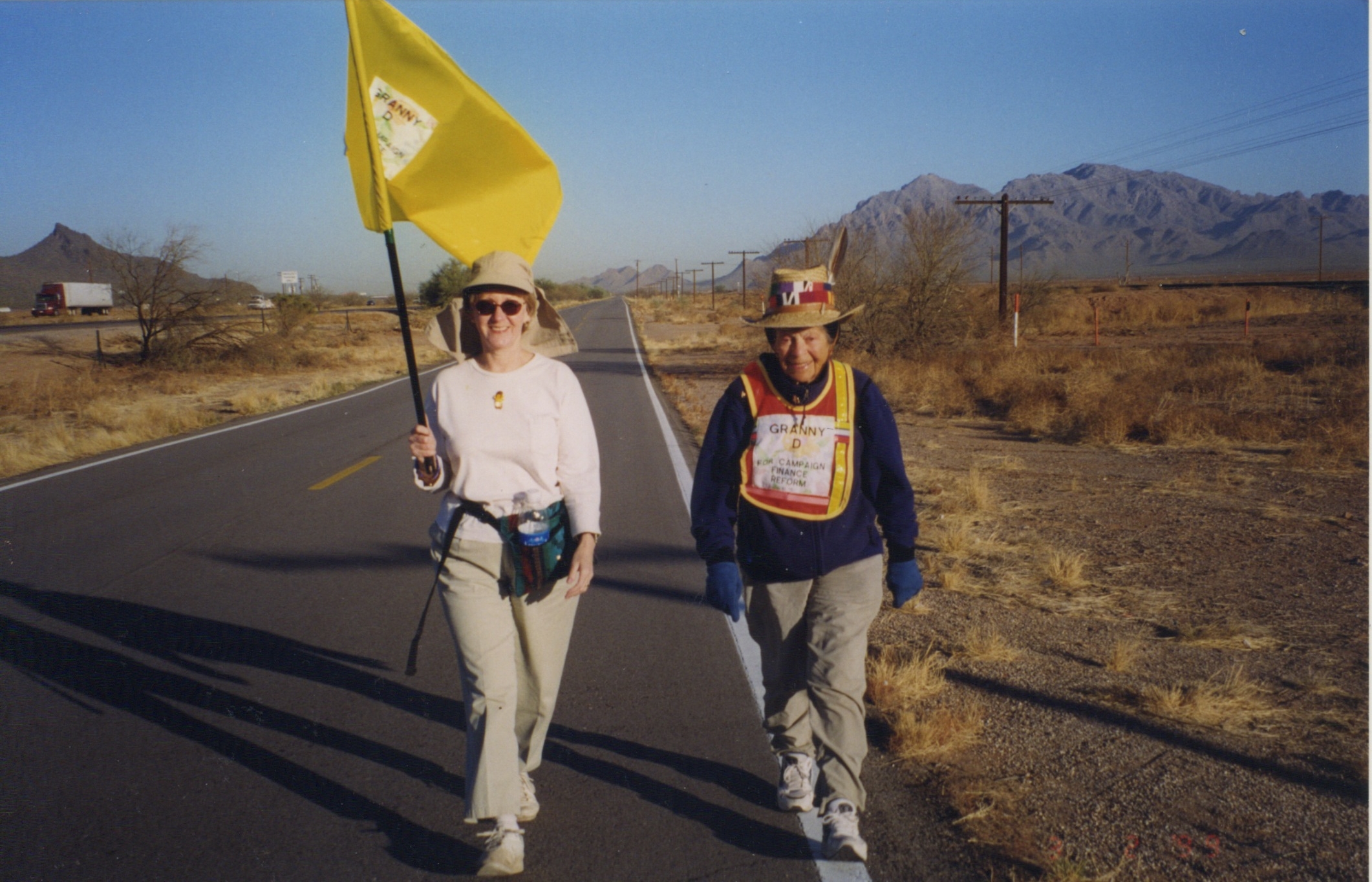 meet anyone who thought that their voice as an equal citizen now counts for much in the corrupt halls of Washington? No, I did not. Did I meet anyone who felt anger or pain over this? I did indeed, and I watched them shake with rage sometimes when they spoke, and I saw tears well up in their eyes.

The people I met along my way have given me messages to deliver here. The messages are many, written with old and young hands of every color, and yet the messages are the same. They are this: Shame on you Mitch McConnell and those who raise untold millions of dollars in exchange for public policy. Shame on you, Senators and Congressmen, who have turned this headquarters of a great and self-governing people into a bawdy house.

The time for this shame is ending. The American people see it and have decided against it. Our brooms are ballots, and we come a-sweeping. We will visit every state where anti-reform Senators are up for reelection and bring with us the long lists of your corruptions, and I will be with them. You will try to buy your way out if it with expensive advertisements. But we will take such spending as further proof of your corruption, for Americans pay ten dollars in extra taxes for each dollar you receive for your campaigns from special interests. 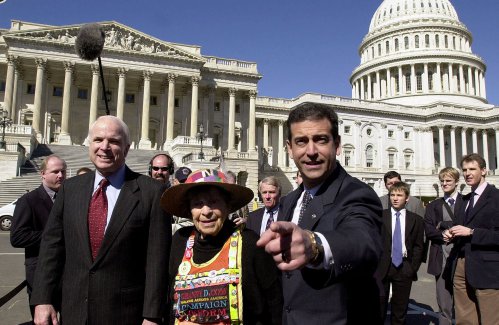 While we are here to speak frankly to our representatives, let us also speak frankly to ourselves: Along my walk I have seen an America that is losing the time and the energy for self-governance. The problems we see in Washington are problems that have been sucked into a vacuum of our own making. It is not enough for us to elect someone, give them a slim list of ideas and send them off to represent us. If we do not keep these boys and girls busy they will always get into trouble. We must energize our communities to better see our problems, better plan their happy futures, and these plans must form the basis of our instructions to our elected representatives. This is the responsibility of every adult American, from native to newcomer, and from young worker to the long retired. If we are hypnotized by television and overwrought by life on a corporate-consumer treadmill, let us snap out of it and regain our lives as a free, calm, fearlessly outspoken people who have time for each other and our communities. Let us pass election reforms and anti-corruption measures in our towns and cities and states, winning the reform wars where they are winnable, changing the national weather on this subject until the winds blow even through these old columns.

Now, Senators, back to you. If I have offended you speaking this way on your front steps, that is quite as it should be; you have offended America and you have dishonored the best things it stands for. Take your wounded pride, get off your backs and onto your feet, and go across the street to clean your rooms. You have somewhere on your desks, under the love letters from your greedy friends and co-conspirators against representative democracy, a modest bill against soft money. Pass it. Then show that you are clever lads by devising new ways for a great people to talk to one another again without the necessity of great wealth. If you cannot do that, then get out of the way—go home to some other corruption, less harmful to a great nation. We have millions of people more worthy of these fine offices.

The People of our nation do care. They have told me. They laugh with disgust about you on the 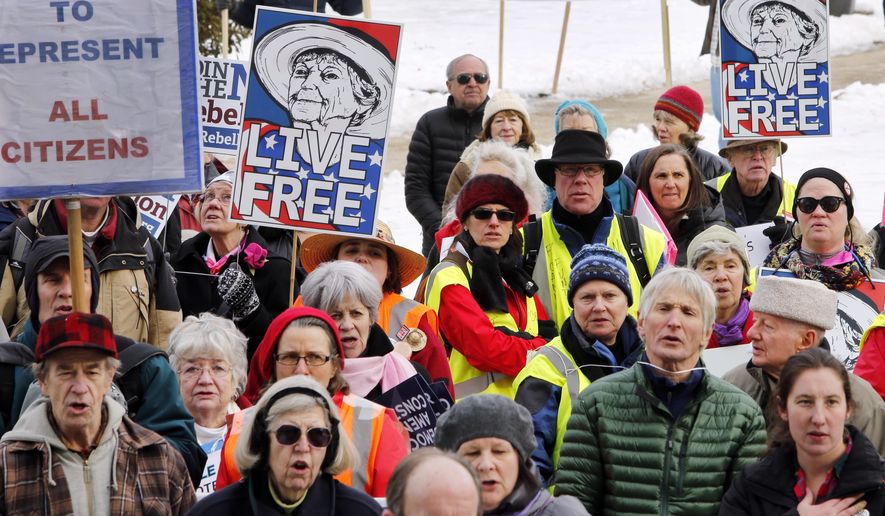 beaches of California. They shake their heads about you in the native village of Hashan Kehk in Arizona. In Toyah, Texas, they pray for deliverance from your corruption. In Little Rock, they understand in anger how you undermine their best dreams for our society. And in Memphis and in Louisville and in Chillocothe and Clarksburg, through Pennsylvania and Maryland and into this city today, the people see you for what you have become and they are prepared to see you another way: boarding the trains at the great train station down the street. They are ready for real leaders, unselfish and principled leaders who will prove their worth by voting for meaningful campaign finance reform this year.

The time has come, Senators, for reform or for some new Senators. Tell us which it will be, and then we will go vote.

Text of this speech in PDF

To be a part of the nationwide movement to end Big Money politics.   Find out how you can help by going here and stay informed.