In addition to representing the interests of their voting (and fundraising) constituencies, elected officials naturally base their public policy decisions on their own personal experience, background, and beliefs. While perfect descriptive representation is not required for a functioning democracy, significant overrepresentation of certain demographic groups may serve as an indicator of systemic bias and can lead to underrepresentation of interests that don’t correspond to the dominant group in elected office. In New Hampshire, women, people of color, and people with low socioeconomic status are significantly under-represented in state government relative to their share of the general population.  The following analysis covers current 2015 state and federal office-holders as well as mayors and city councilors in New Hampshire’s five largest cities of Manchester, Nashua, Concord, Dover, and Rochester.

Although women make up 50.6% of New Hampshire’s population and currently hold several highly-visible political offices, the vast majority of elected officials in the state are male. All five members of the Executive Council are male. 16 of New Hampshire’s 24 state senators (67%), including the senate president and majority and minority leaders, are male. Likewise, 286 of the state’s 400 state representatives (72%) are male, including the speaker of the house and majority and minority leaders. Committee leadership is also skewed along gender lines with men holding seven out of 12 (58%) standing committee chairmanships in the state senate and 21 out of 25 chairmanships (84%) in the state house.

The same trend can be seen at the municipal level, with women serving as mayor in two out of the state’s five largest cities (40%) and holding only 25% of city council seats in those cities. Only at the federal level do women outpace men in terms of representation, with three out of four members of the state’s congressional delegation being women after the 2014 election. (42) Taken together, women currently hold 29% of the seats in federal, state, and municipal office in New Hampshire, giving the state a gender representation grade of C, where 40-50% parity corresponds to a grade of A, 30-39% B, 20-29% C, 10-19% D, and less than 10% F.

Although New Hampshire ranks among the least diverse states in the nation in terms of race/ethnicity, the rate of diversification in the general population far exceeds that of state government. Racial and ethnic minorities currently make up 8.4 of the state’s population yet none of the state’s 24 senators, five executive councilors, four U.S. senators and representatives, and governor is a person of color. The state house alone has minority representation, with six out of 400 members (1%) identifying as people of color according to interviews; no official state data on racial/ethnic representation among elected officials are maintained. The overall rate of representation for racial/ethnic minorities in state and federal office in New Hampshire is 1%.

The trend is similar in New Hampshire’s five largest cities, where racial/ethnic minorities make up between 6% and 31% of the population but do not hold a single seat as mayor or on city council. Taken together, New Hampshire receives a grade of F for minority representation at the local, state, and federal level, where 8-9% parity with the percentage of people of color in state corresponds to a grade of A, 6-7% B, 4-5% C, 2-3% D, and less than 2% F. These data may explain, in part, the lower rate of voter turnout among people of color compared to the general population. 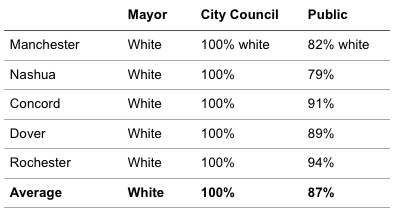 The final measure of representation is socioeconomic status of elected officials compared to the population as a whole. Because financial interest disclosure forms filed with the Secretary of State do not reveal information about the economic standing of state officials, the only available proxy for socioeconomic status is educational attainment and work/professional background.

A review of the latest available biographical information on elected officials posted on personal and government websites reveals that the governor, executive council, state senate, congressional delegation, and city mayors enjoy significantly higher levels of educational attainment than the general population. (43) Only one out of 39 elected officials under review (2.6%) had less than a BA qualification, while two-thirds of Granite Staters have not earned a college degree. (44) Similarly, while only 2.3% of the state population holds a Doctorate or professional degree, nearly one-third of the elected officials (31%) do.

The elected officials under review were also significantly more likely than the general public to engage in high-income professional activities. Eight elected officials (21%) hold law degrees and report previous work in law, the most common profession. Five (13%) hold an MBA and at least 13 (33%) report past or present work in various private-sector industries from insurance, real estate, and banking to healthcare, hospitality and agriculture. Six officials (15%) report work in education. The trend toward older, more educated representatives may be a reasonable consequence of the requirements and economic constraints on public service in the Granite State instead of electoral bias. (45) In the absence of a normative standard for socioeconomic standing of elected representatives relative to their constituents, grades are not assigned.

(42) New Hampshire’s all-female congressional delegation in 2012-14 made national news as the first such delegation in the country.

(45) Members of the New Hampshire General Court serve as volunteers with a yearly stipend of just $100.