Although New Hampshire enjoys a longstanding democratic tradition and established institutions of representation, recent data across six core dimensions of democratic practice paint a troubling picture of the health of democracy in the Granite State. The core findings for each dimension are summarized as follows; comprehensive data and sourcing are provided in the sections that follow.

I. Voting: Except in presidential elections, the majority of eligible New Hampshire voters stays home on Election Day for reasons that are partly within and partly beyond their control, earning grades of B, C, D, and F.

II. Civic Participation: Fewer than one in five Granite Staters regularly participates in politics beyond the ballot box and a similar percentage is able to correctly name their elected representatives, earning grades of D and F.

III. Election Funding: A small and unrepresentative sample of New Hampshire voters currently provides the tens of millions of dollars raised to fund campaigns campaigns, even as the majority of total spending comes from out of state, earning grades of C, D, and F. 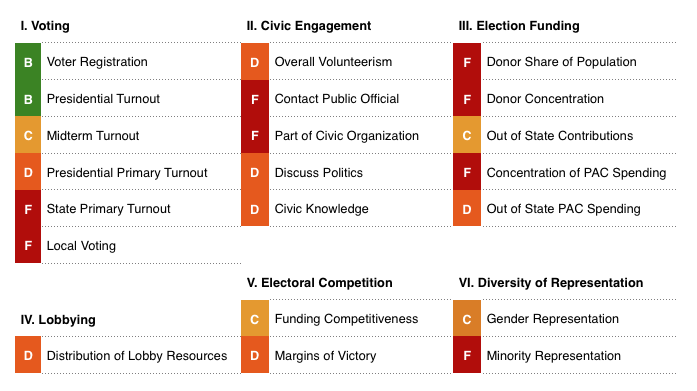