Lobbying is one of the least-regulated and most influential dimensions of political representation in New Hampshire. In addition to making campaign contributions directly to candidates and funding outside groups in support of candidates and issues, hiring professional lobbyists allows businesses and other organizations to directly influence the policymaking process by drafting legislation, soliciting co-sponsors, and advocating for passage (or defeat) of legislation in Concord.

The vast majority of lobbying spending comes from the private sector, nearly six times more than every other sector combined. In the absence of effective conflict-of-interest and revolving door regulations at the state level, it is common for individuals to move between positions in public office and lucrative lobbying jobs. The following analysis covers 2014 state lobbying activities based on a new public database developed by Open Democracy in connection with this research; no data is available on municipal lobbying activities.

4.1 The Cost of Lobbying

Although aggregate data on lobbying is not publicly available in New Hampshire, careful analysis of individual lobbying disclosure forms filed with the Secretary of State reveal a high level and concentration of lobbying spending in Concord. In 2014, 249 registered lobbyists received over $10.2 million to lobby the New Hampshire state government on behalf of 449 mainly private-sector clients. (38) A total of 572 registered lobbyist-client relationships existed in 2014 with the average lobbyist or firm receiving approximately $41,000 in compensation for their services in 2014.

Although the average lobbyist represented three clients, approximately three-quarters of registered lobbyists had only one client while the remaining quarter averaged more than eight clients each. The top ten lobbyists represented more than two hundred clients and earned fees as high $977,357 in 2014. In the absence of an accepted standard on lobbying, grades are not assigned for the total cost of lobbying or the source of lobbying expenditures in 4.2.

The 449 lobbying clients represent a wide array of mainly private-sector entities across more than a dozen industries based in New Hampshire and beyond. Corporations and trade associations accounted for $8.2 million or 81% of total lobbying expenditures in 2014. The top five private-sector industries engaged in lobbying were Health; Miscellaneous Business; Energy and Natural Resources; Finance, Insurance & Real Estate; and Communications and Electronics with $1 million or more in lobbying expenditures each. Nine of the top ten largest individual lobbying clients were also from the private sector, led by energy companies Public Service Company of New Hampshire and Northern Pass Transmission, both subsidiaries of Massachusetts-based Eversource, at $586,096 combined.

Public-sector and non-profit lobbyists representing single-issue advocacy organizations as well as school districts, municipalities, universities, and the like spent a combined $1.9 million to lobby state government in 2014 or 18.2% of the total–approximately one-fifth the amount spent by business . The largest public-sector or non-profit lobbyist client was the Pew Charitable Trusts, which works on education, economic development, and related public policy matters, followed by the American Cancer Society promoting cancer research and the New Hampshire Municipal Association advocating on behalf of cities and towns.

Finally, labor organizations like the AFL-CIO, NEA, State Employees Association, and the police and firefighters unions spent a combined $247,660 on lobbying state government in 2014. At 2.4% of total lobbying expenditures, labor unions were outspent by business by a factor of 36 to one. 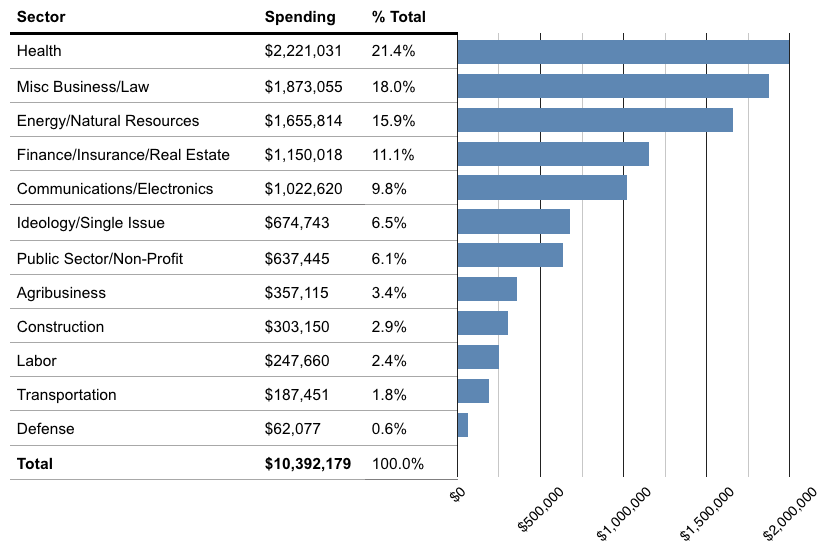 Although nearly 500 entities reported lobbying activities in 2014, lobbying expenditures were highly concentrated among the a select few major players in Concord. The top five private-sector industries alone accounted for 76% of total lobbying expenditures while more than half the $10.2 million spent on lobbying came from the top 58 clients, each of whom spent more than $45,000 on lobbying. Only seven of these big-spending clients came from the public or non-profit sectors. None were from labor, and the remaining 51 were from the private sector. The single biggest lobbying expenditure by Public Service Company of New Hampshire totaled more than the combined expenditures on the bottom 156 (31%) lobbying clients combined, and more than the total spent by labor. Using the Gini coefficient to measure concentration of lobbyist expenditures, introduced for campaign contributions above, (where 1 is full funding by a single actor and 0 is equal funding by all actors), the distribution of spending by lobbyists in New Hampshire is 0.767. With less than 13% of clients spending the majority of lobbying funds, the state earns a grade of D for distribution of lobbying resources, where a relatively equitable distribution of 40% or more of clients spending half of the lobbying total corresponds to a grade of A, 30-39% B, 20-29% C, 10-19% D and less than 10% F. 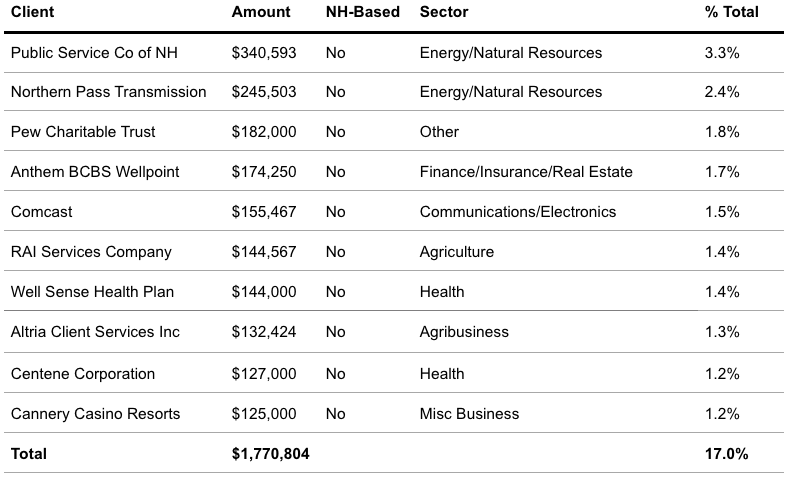 (38) Note: reported spending covered lobbyist fees and certain lobbying-related expenses, although the precise amount cannot be known because of variable reporting practices and insufficient guidance or review on the part of the Secretary of State’s office.