As a hotly-contested swing state with same-day registration and the First-in-the-Nation Presidential Primary, New Hampshire fares well in terms of voter turnout during presidential elections relative to the nation as a whole. Approximately three out of four voting-age citizens are registered to vote, and turnout in presidential general elections routinely approaches 70%. Nevertheless, in most New Hampshire elections, the majority of eligible voters stays home and thousands of residents are legally disenfranchised or face informal barriers to voting.  The following analysis covers voting in the most recent 2014 state and federal elections, as well as the most recent 2013 municipal elections in New Hampshire’s five largest cities for which data are publicly accessible: Manchester, Nashua, Concord, Dover, and Rochester. Historical voting data going back to 2000 are also considered for comparative purposes.

Meanwhile, average turnout in New Hampshire’s five largest municipalities of Manchester, Nashua, Concord, Dover, and Rochester was even lower at 15% during the most recent local elections of 2013, earning a grade of F. (10) In all elections, especially state and local primary and general elections, the rate of voter turnout is positively correlated to the individual’s socioeconomic status (income and education), according to national surveys. (11)

Two categories of New Hampshire adults are legally ineligible to vote: non-citizens and people serving time in prison or jail. Approximately 34,000 New Hampshire adults, or 3.2% of the voting age population, are not permitted to vote because they lack citizenship status. (12) Although non-citizen voting has been found constitutional and was previously permitted in local and/or state elections by New Hampshire and approximately forty other states before the 1920s, every state except Maryland currently restricts the franchise to full-fledged citizens. (13)

The second category of disenfranchised people consists of the 5,054 citizens – 0.5% of the voting age population – who are currently incarcerated in New Hampshire, according to the latest official statistics for 2013. (14) Unlike New Hampshire’s neighbors Vermont and Maine but consistent with the 47 other states, state law forbids any person from casting a ballot while they are in prison or jail. In the absence of an objective standard of voter enfranchisement for non-citizens and people with criminal convictions in the United States, no grades are assigned.

New Hampshire’s low rate of turnout among eligible voters in most elections is attributed to a range of factors, some of are within and others beyond the control of individual voters. According to the most recent survey of voting behavior for which state-level data are available, the most common reasons given for not voting in New Hampshire are disapproval of candidate choices; unavailability to vote because of work- or family-related obligations; issues registering to vote or procuring the requisite ID; difficulty accessing the polling location and long lines at the polls; and illness. (15) People whose demographic characteristics correspond to low socioeconomic status disproportionately cite such practical barriers as their reasons for not voting, while other non-voters overwhelmingly cite disapproval of candidate choices. (16) 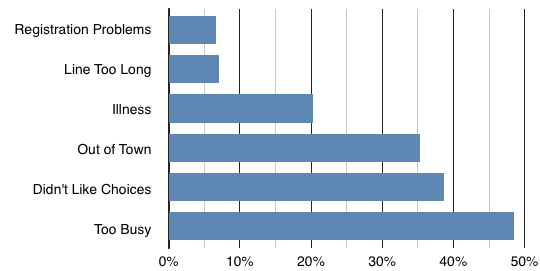 Since 2012, New Hampshire has required all voters to present an acceptable photo ID at the polls or execute a qualified voter affidavit and return an address verification letter to the Secretary of State after the election. (22) New requirements scheduled to take effect in 2015 require voters who do not have an acceptable photo ID to cast provisional ballots only, have their photo taken, and complete a post-election follow-up by mail in order to have their vote counted. The law also limits the range of acceptable identification to driver’s licenses, state-issued identification cards, passports, military IDs, and in-state student identification cards. (23) An unofficial citizen investigation reported numerous instances of voter impersonation fraud which could not be verified for this report. (24) By contrast, academic analyses of 2000-2014 found no evidence of voter fraud in the Granite State. (25) There is considerable public debate about the appropriateness of these and other voting requirements; in the absence of widely-accepted voter access norms, no grades are assigned.

(10) Derry ranks in the top five New Hampshire communities in terms of population but is classified as a town rather than a city; because of the relative inaccessibility of voter turnout data in smaller communities, the same has been limited to only the top five cities representing approximately one-fourth of the statewide population.