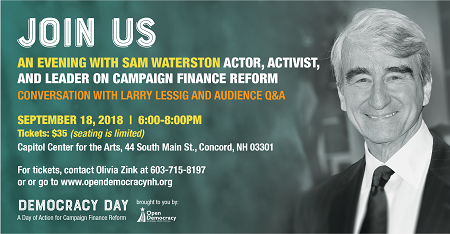 Renowned actor, producer, director and activist Sam Waterston will be with us on Tuesday evening, September 18, 2018.  Please join us at 6 pm at the Capitol Center for the Arts, 44 South Main St., Concord, NH.

Best known for his role as Jack McCoy on the long running NBC drama Law and Order (and currently starring on Netflix's Grace and Frankie), Sam is also a dedicated activist who has committed much of his time advocating for organizations such as Oceana, where he is a board member, Refugees International, Meals on Wheels, The United Way, and The Episcopal Actors' Guild of America.

Sam is also a leader on our issue, Campaign Finance Reform. In 2015, Sam drove through a blizzard to speak at our "We The People" Convention in Veteran's Park in Manchester, saying "I came to New Hampshire looking for hope, and I found it!"  Read his interview on the subject in the Orlando Weekly.