“I am deeply concerned that elections are being bought and paid for by a handful of private interests looking out for themselves–not the people,” said Olivia Zink, Open Democracy’s executive director. “Voters are sick and tired of outside interests spending millions to influence our elections. This poll suggests the public is ready for reform in 2017.”

The telephone poll conducted Oct. 11-17 asked 907 randomly selected adults, 770 of whom plan to vote Tuesday, about a proposed state law with three components. First would be giving public matching funds to candidates who committed to relying solely on small donations from voters for their other campaign funds. Second, it would require all outside groups to fully disclose their spending on elections in the state and, third, the state would strictly enforce all campaign finance laws. The margin of error was +/‐ 3.3 percent for all respondents and +/‐ 3.5% for likely voters.

Open Democracy was founded by Doris “Granny D” Haddock of Dublin, who finished a 3,200-mile cross-country walk for campaign reform in 1999 at age 90. Members of the nonprofit’s New Hampshire Rebellion walked more than 40,000 miles across the state over two years to make money in politics a leading issue in the presidential primary in February.

The growing ranks of campaign reform activists include “Diet for a Small Planet” author Frances Moore Lappe. She will speak Nov. 19 in Hooksett at Open Democracy & NH Rebellion’s “Democracy Dinner,” where she will unveil her new “Field Guide to the Money-Out-of-Politics Movement.” 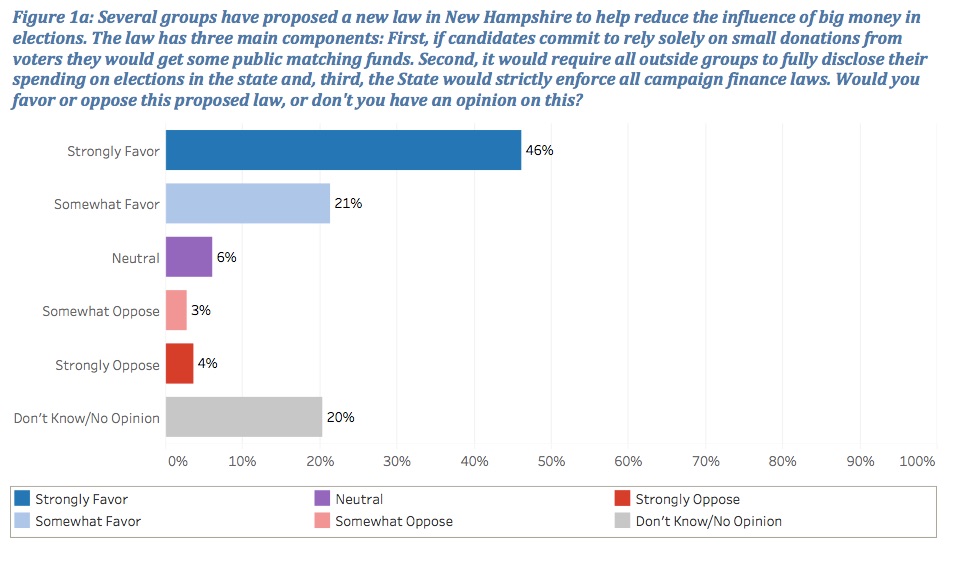