House Bill 1773 would provide voters with four $25 “civic dollars” to donate to candidates for Governor, Executive Council and state Senate who pledge to limit their maximum donation from private donors to $250. The bill, sponsored by Rep. Renny Cushing, also includes other reforms, including stronger requirements to ensure financial transparency of SuperPACs and candidate campaigns, and tougher enforcement of campaign finance laws. 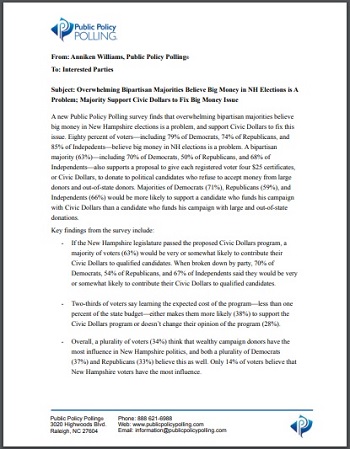 “Civic Dollars will give New Hampshire voters a stronger voice,” said Olivia Zink, Executive Director of Open Democracy in Concord. “Our elected officials should work for all of their  constituents, not just for the big contributors who put them in office.”

"My lengthy and varied experience in New Hampshire election campaigns has convinced me of the need for a public election financing system as a voluntary alternative for candidates," former state Senator Jim Rubens said in prepared testimony. "The present purely-private elections finance system seriously restricts participation by otherwise viable candidates for governor, councilor and state senate and narrows the range of debate and policy proposals during campaigns.  The result is fewer choices for voters among candidates and slower progress in solving public policy challenges.  Additionally, the current purely-private system tilts influence away from voters and toward those with money to spend on campaigns."  Rubens has also served as chair of the GOP platform committee; chair of the 2000 GOP redistricting committee; and on two election finance panels which proposed public election finance legislation.  As candidate for US Senate, he proposed voter tax rebates as a means to provide public finance mechanism for Congressional elections.

Other key findings from the survey include:

•    A majority of respondents (63%) would be likely to contribute their Civic Dollars to qualified candidates, including 70% of Democrats, 54% of Republicans and 67% of Independents.

•    38% of respondents said they were even more likely to support the Civic Dollars program after learning that it would cost less than 1% of the New Hampshire state budget.