As the presidential primary season heats up in New Hampshire, the amount and influence of money in national politics is becoming a major election topic for candidates and the public. Nearly six years after the Supreme Court handed down its controversial Citizens United v. FEC ruling, allowing unlimited spending by corporations and unions on behalf of candidates, the rate of increase of money in local, state, and national elections has continued to far outstrip inflation. Although New Hampshire’s off-year municipal elections have historically seen low spending and low turnout, the trend in campaign funding in the upcoming November 3rd mayoral elections in the state's two largest cities of Manchester and Nashua is not dissimilar to that of national elections.

For the first time ever, all four candidates for mayor in the 2015 Manchester and Nashua general elections have raised six-figure sums to finance their election elections totaling $847,023. Incumbent Manchester Mayor Ted Gatsas reported an unprecedented $252,810 at the end of June and an additional $57,050 on September 24th, ten days after the primary election, for a combined $309,860. That sum is twice the $152,000 Gatsas raised through the second quarter in 2013 and three times the $99,000 (including $25,000 in self-funding) he reported in 2011. Gatsas reported 324 individual donations for an average donation size of $956, the largest of any mayoral candidate in either city. Gatsas received the most votes in the September 14th primary.

Figure 1: Amount Raised by 2015 Mayoral Candidates in Manchester and Nashua

Alderwoman Joyce Craig, the runner-up in the Manchester mayoral primary, disclosed $226,000 in total contributions from 992 donors by the October 1st deadline, a record in the number of donors raised by mayoral candidates in 2015. The average size of Craig’s donations was $228, one-fourth the size of her opponent.

In Nashua, the open mayoral election drew a crowded field of six registered candidates in the September 7th primary, with the two highest spenders, At-Large Alderman Jim Donchess and former Nashua Chamber of Commerce CEO Chris Williams, raising in excess of $100,000 each for the primary – a first in Nashua’s history and more than three times their nearest opponent. Both men advanced to the general election.

According to the latest official disclosures published by the Nashua City Clerk on October 14th, Chris Williams raised $185,244 and Jim Donchess raised $125,916 by mid October, including reported in-kind donations and excluding candidate self-funding by the Donchess campaign ($19,500). Williams’ campaign received approximately 490 donations with the average donation totaling $378 while Donchess’ campaign received approximately 718 donations averaging $175 each, or half the size of his opponent’s campaign.

The four candidates for mayor in the Manchester and Nashua general election reported sharply varying levels of reliance on large campaign contributors affecting the concentration of fundraising at the top. In Manchester, incumbent mayor Ted Gatsas raised just 18% of his campaign contributions in amounts less than $1,000 came while 64% came in larger amounts of $2,000 or more and 39% came in amounts of $5,000 or more from 19 donors. The top ten donors to the Gatsas campaign accounted for 25% of the total funds or $77,200.

By contrast, Alderwoman Joyce Craig raised 60% of her total funds in amounts of less than $1,000 and 20% in amounts of $2,000 or more from 14 donors. Only three donations were made to the Craig campaign in amounts of $5,000 or more and the campaign’s top ten donors gave $37,699 or 17% of the total. As a share of total fundraising, smaller donations of less than $1,000 were over three times greater for Alderwoman Craig than Mayor Gatsas. 31 donors, representing 0.03% of Manchester’s population, accounted for more than half of the total funds raised by Mayor Gatsas while an estimated 0.2% of Manchester’s population provided more than half of Alderwoman Craig’s contributions.

In Nashua, the two mayoral candidates showed a similar, if less pronounced, trend of large donor concentration on the part of former Nashua Chamber of Commerce CEO Chris Williams and smaller donations on the part of At-Large Alderman Jim Donchess. 44% of funds raised by Williams came in amounts of less than $1,000 while 36% exceeded $2,000 and 22% exceeded $5,000. The top ten donors to the Williams campaign gave $55,500 or one-third of the total funds (32%), not counting in-kind donations. 40 donors, representing 0.04% of Nashua’s population, accounted for more than half of the total funds raised by Williams.

By contrast, Alderman Donchess raised approximately two-thirds of his funds (63%) in amounts of less than $1,000 and 16% in amounts of $2,000 including a single donation of $5,000 (not counting self-funding). The top ten donors to the Donchess campaign accounted for 19% of the total funds or $24,336. An estimated 0.2% of Nashua’s population provided more than half of Alderwoman Donchess’ contributions. 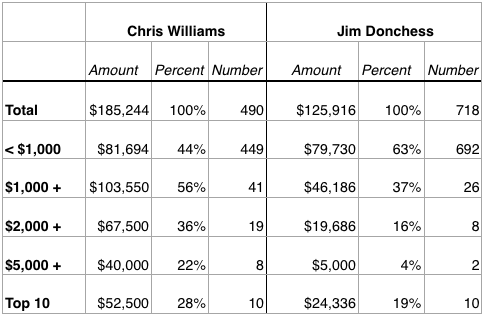 Analysis of the source of campaign contributions of $1,000 or more made to the two general election mayoral candidates in Manchester and Nashua found marked disparities in both geography and type of donors. Smaller donations of less than $1,000 were not analyzed for geography and type due to incomplete reporting and data formats.

In Manchester, Mayor Gatsas raised 70% of his donations of $1,000 or more from sources outside the Queen City, in contrast with 41% raised from outside Manchester by his opponent, Alderwoman Craig. Only one-third (34%) of the contributions to Mayor Gatsas came from individuals, with the remainder coming from corporations, unions, or other political committees. Three-quarters  (76%) of the contributions to the Craig campaign were made by individuals. 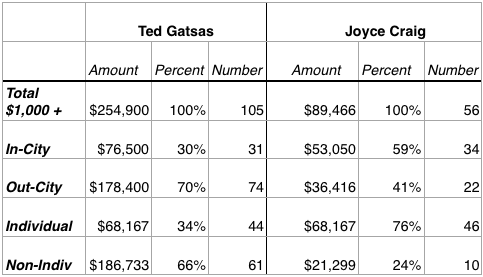 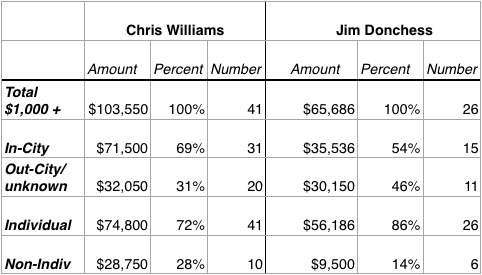