This NH House maps report is Part II of the Map-a-Thon Project's proposed 2020 voting district maps. This project is supported by Open Democracy Action, the Kent Street Coalition, Granite State Progress and the League of Women Voters New Hampshire. To date, over 250 people have participated in the process, ranging from research and data collection to mapping and analysis.

Our Mapping Process is Fair & Transparent The Map-a-Thon's project is a transparent process, including the software, criteria, data sources, maps, and analysis tools. Interested citizens and legislators can replicate our maps to verify our conclusions. We welcome your efforts to try to make even better maps! Please follow the links in the report to see the maps in our software.

Map-a-Thon maps also use “communities of interest” data when possible to determine what towns should – and should not – be in a district together. These, and other techniques, should be a model for the tools a future independent redistricting commission would use to determine voting districts, replacing the current partisan model. It should be noted that use of communities of interest is limited for House maps because of the hierarchy of constitutional and court rules.

Why NH House Redistricting is Difficult – and Disappointing

Mapping NH House of Representatives districts is constrained by these factors:

These factors often force us to put smaller towns with towns large enough to have their own dedicated voting districts, and sometimes results in larger, multi-town districts.

We hope to make policy recommendations for a better process in 2030.

We are disappointed that these constraints make NH representation often less local, personal, and reflective of individual communities. Our 2020 maps do help more Granite Staters get the representation they deserve, but we have a long way to go before our voting districts are truly representational.

The data on this page is available in PDF form by downloading it at OpenDemocracyNH.com/redistricting/mapathonreport2a.pdf

The small size of Belknap County, the dispersion of towns eligible for their own House districts, and the number of reps to be allocated make the county difficult to map and honor 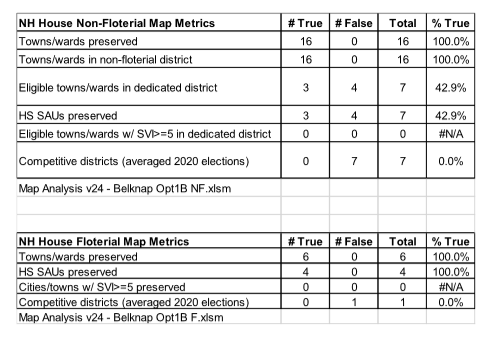 the NH Constitution. The ideal number of reps is 18.498, .002 from having to round to 19, the worst possible scenario. Belknap County also gained population, resulting in a smaller than average window of deviation. Because 8 of 11 towns have a population of greater than 3,444, smaller towns which need to be in districts with other towns often need to be attached to larger towns robbing them of their dedicated House district. Without Constitutional and policy changes, Belknap willl continue to be deprived of proper representation. 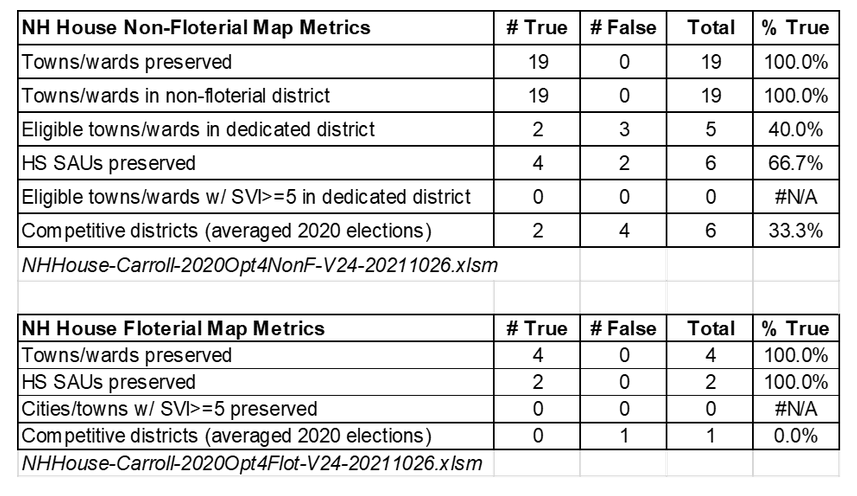 adds complexity to the mapping. The southern part of Carroll County has more towns which qualify for their own House districts. The 2010 map districts both Conway and Ossipee in with smaller towns. The 2020 Map-a-Thon gives those towns their own, thus reduces violations of the NH Constitution vs. the 2010 the map, but Wolfeboro loses its own district.

The geography of two towns “force” errors on the map. Brookfield and Tuftonborough are smaller towns surrounded by larger ones. These communities need to be in a district, thus had to be paired with a larger town which should have had its own House district. Freedom and Effingham are now is a smaller district, but Sandwich and Tamworth couldn't be done in our maps, something for which residents have asked.

Two unfortunate results: Sandwich and Albany are technically contiguous, but does not meet our standards for compactness. We also created two large districts out of necessity, but advocate for smaller districts whenever possible. 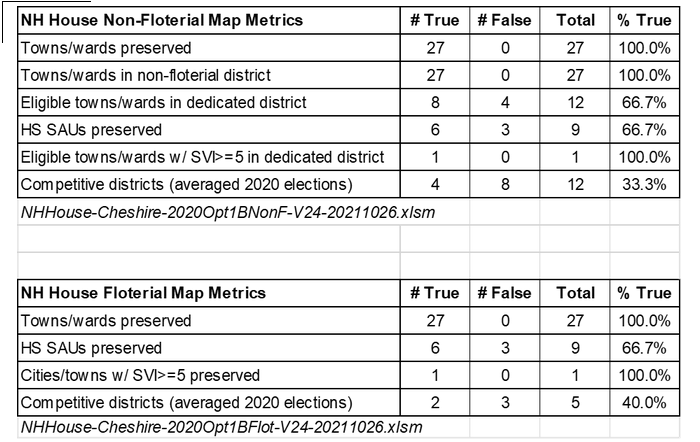 Cheshire County lost a state representative seat due to a loss of population in the last 10 years, one of the reasons the map needs to be adjusted.

One of the advantages of the Map-a-Thon map includes facilitating four eligible towns to receive their own House districts, vs. two in 2010. This includes Hinsdale, Jaffrey, Ridge & Winchester. But these improvements come with baggage. Some districts are larger than 2010, and all towns are in a floterial. Reducing floterials would have resulted in even larger districts.

2010's Cheshire District 1 is broken up into now in smaller districts, with a smaller in population per district, with eligible Hinsdale receiving its own dedicated House district.

Pros & Cons of this Map 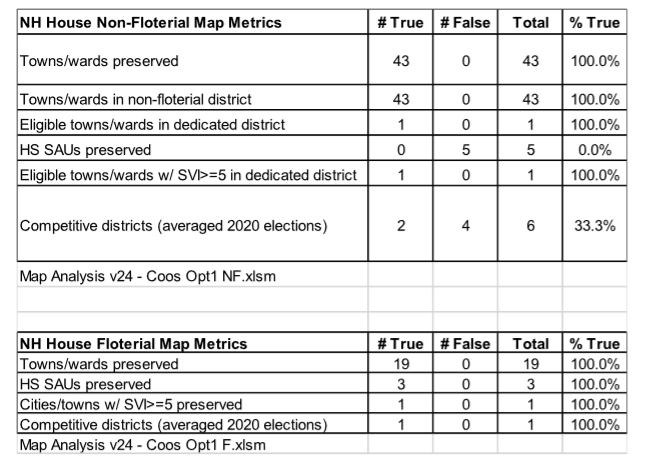 Map-a-Thon's 2020 proposal for Coos has zero violations of the NH Constitution for towns eligible for their own House district. There had been two towns eligible, but Lancaster lost population since 2010, and no longer qualifies.

Most of the districts now follow the roads, making it easier for legislators to travel their districts, and we have the same number of districts, but Coos did lose a seat because of population loss.

The sparsely-populated North Country unfortunately means large, sprawling districts, no matter who is doing the mapping. 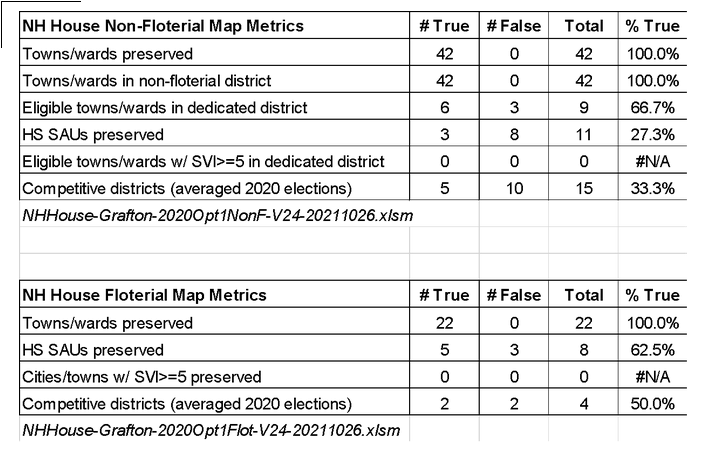 Our maps do not make significant headway on getting towns their own House districts, with the same number in both the 2010 as with our 2020 maps. Our maps have three violations, with the eligible towns of Littleton, Haverhill and Plymouth included in multi-town districts.

The Map-a-Thon maps have dedicated House districts for Canaan, Enfield .Lebanon & Hanover, and for a total of six out of nine eligible towns. 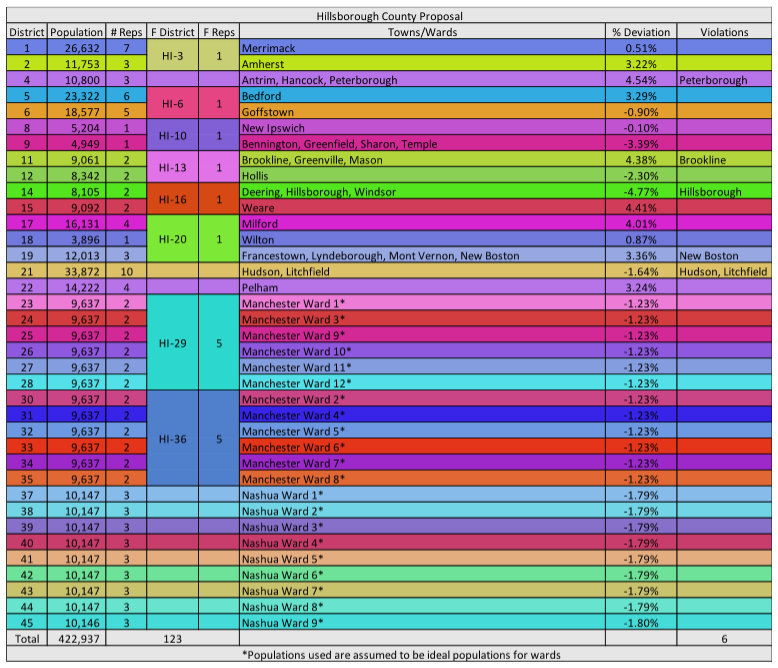 Our Hillsborough County map made some significant improvements over 2010. There are 37 towns & city wards eligible for their own House districts(s), and the Map-a-Thon maps 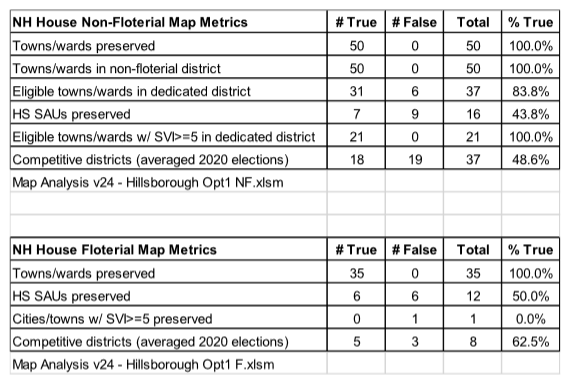 reduced the violations from eight to six for that Constitutional requirement.

One particular problem on the 2010 map included the incredibly large district of Hudson & Pelham, Hillsborough District 37. Both towns made substantial population gains in the preceding decade, and stand at 25,826 for Hudson and 14,222. Because of its larger number of voters, Hudson candidates dominate the elections, leaving Pelham underrepresented. On the downside, the smaller but still own-district eligible Litchfield was included in a district with Hudson.

Hillsborough Deering & Most ConVal towns are districted together Although Brookline did not get it's own district, it was put in a district in which it shares communities of interest. 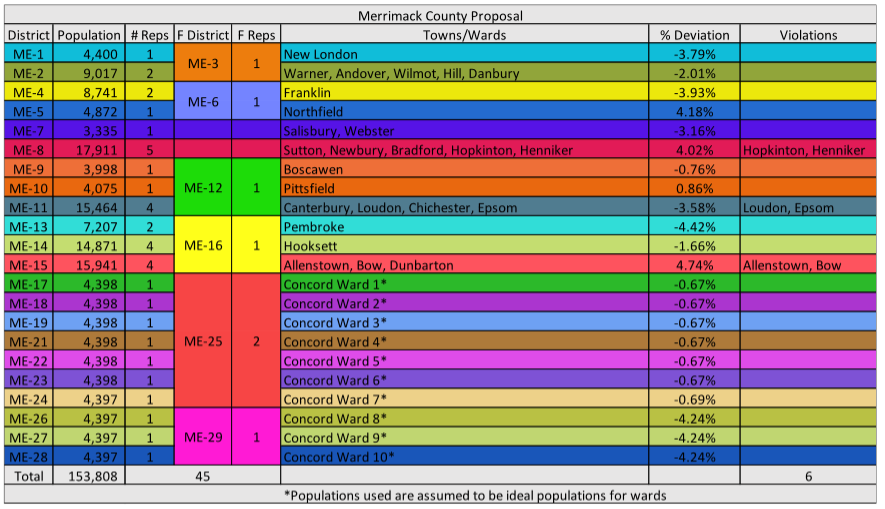 One of the biggest improvements for NH House district maps was made in Merrimack County. In 2010, there were 11 violations of the NH Constitution, but in our maps, just six. Three towns, Chichester, Canterbury, 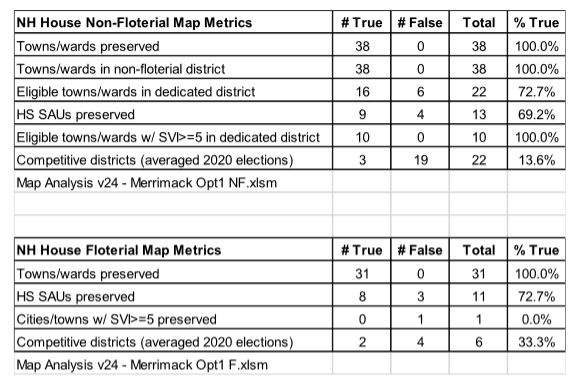 Dunbarton, are surrounded by larger, own-district eligible towns, forcing violations. There's nothing we can do without a change in Constitutional rules.

Merrimack receives 44.662 reps and like other counties, the distance from a whole number makes it more challenging. 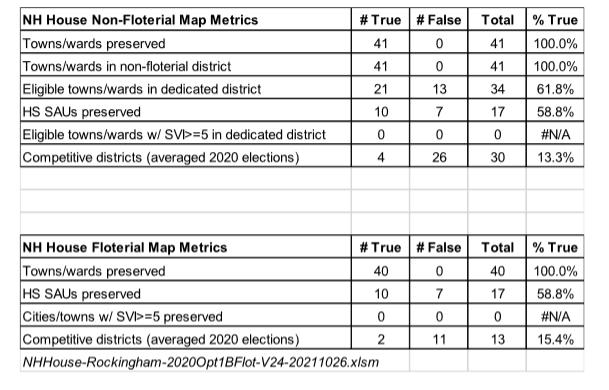 It also has many own-seat eligible towns, plus has the geographic limitations of the seacoast border.

That said, Map-a-Thon maps show a slight improvement of two additional towns getting dedicated House districts. This includes Atkinson, Plaistow, Hampstead, Sandown & Seabrook. In working for the greater good, Epping & Raymond unfortunately lost their own district in our maps.

Three of Rockingham's violations couldn't be helped under our current Constitutional & court constraints. Newington, Newfields and New Castle are small towns surrounded by larger, own-district eligible towns, and need to be in a district with another town. That creates violations for some of the surrounding towns. 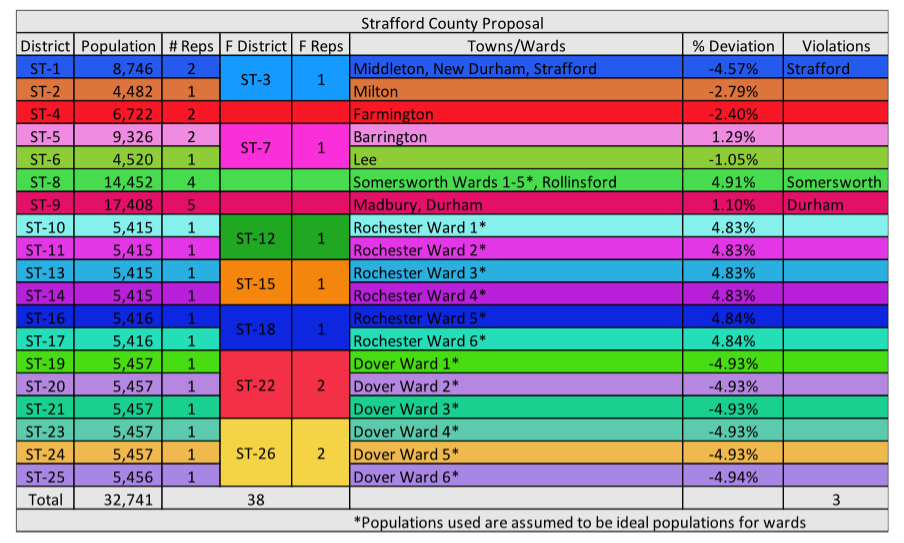 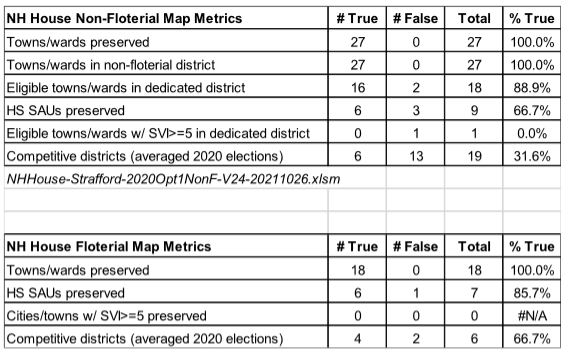 Map-a-Thon succeeded only with a slight improvement of two additional towns getting their own districts. Disappointing was that we had to leave the district with Strafford and New Durham, which connects in the middle of the woods.

Two “forced” violations are Rollingsford and Madbury, which need to be districted with surrounding larger towns.

Towns which did get their dedicated districts were Milton & Dover, and Barrington, Lee, Rochester & Farmington kept their districts.

We're sorry to report that Sullivan County is the only county which has more violations for 2020 than in 2010.

Population loss led to a reduction to an apportionment of 12.504 reps, which made it measurable harder to allocate the representation over the towns. Floterials can sometimes help, but did not help in Sullivan.

Where there were two violations for eligible towns not getting their own House district in 2010, these challenges caused one more violation, AND forced us to make districts that would be larger than we would like.

The Map-a-Thon team regrets that we were not able to offer a better map. We look forward to changes, such as a larger deviation, which would allow for better districts. One scenario the team ran used an 11.9% deviation (1.9% over the norm) and it dropped Sullivan County from three violations to zero.

An increase in allowable deviation would help in Sullivan County