New Hampshire's unusual floterial districts – districts which “float” above other districts, are used to apportion remaining population, after the population in multiples of the ideal 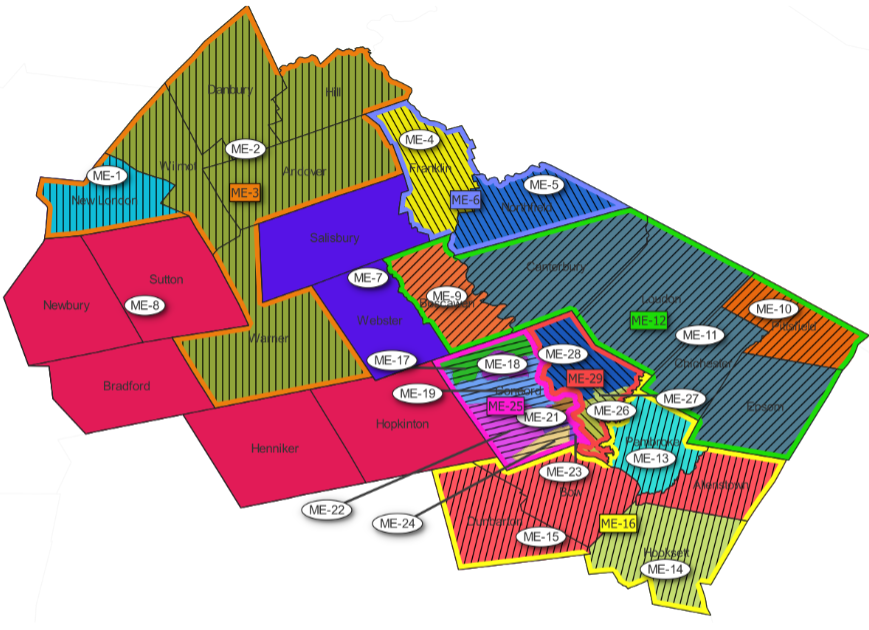 population (3,444 in 2020 = 1 state rep seat) are assigned. Its use was intended to help for proper representation, but some legal observers suggest that a floterial may be federally unconstitutional. Some floterials may have tens of thousands represented by one or two reps, possibly violating the one person-one vote rule. Bad actors could also employ floterials for gerrymandering. Here's a definition from a 2019 Boston University Law Review article:

Although most district maps are drawn using single-member, multi-member, or at-large districts, a map may also include floterial districts, an infrequently used redistricting device. A floterial is a legislative district “which includes within its boundaries several separate districts or political subdivisions which independently would not be entitled to additional representation but whose conglomerate population entitles the entire area to another seat in the particular legislative body being apportioned. Unlike the more commonly used district types, the Supreme Court has yet to directly rule on the constitutionality of floterials. New Hampshire is the only state that currently uses floterial districts, although several other states have used this redistricting device in the past. “GOBBLEDYGOOK” OR UNCONSTITUTIONAL REDISTRICTING?: FLOTERIAL DISTRICTS AND PARTISAN GERRYMANDERING” by Mikayla Foster, 2019. https://www.bu.edu/bulawreview/files/2019/01/FOSTER-2.pdf

We are now aware that Wyoming, which has a similar rural, low density population, also uses floterials.

Floterials are in our Constitution In 2006, a NH Constitutional Amendment amendment, which NH voters adopted, amended Part 2, Article 11 to say:

The Calculation of Floterials Makes Mapping Non-Floterials Districts Complicated A 2002 NH Supreme Court decision, citing the U.S, Constitution's “one person-one vote” provision and threw out the previous “aggregate” method of calculating how the floterial districts are calculated, and recommended a “component” method equation to properly apportion representation. The Map-a-Thon team developed an “Alternative Component Method,” but flaws in the math prevented us from moving forward with this approach.