Concord, NH - A group of New Hampshire leaders from both political parties is calling on state lawmakers to put an end to endless spending by billionaires and special interest groups in elections, a practice it believes is undermining American democracy.

The NH House Legislative Administration Committee voted 7-3 on Tuesday to refer to interim study SB 136, the bipartisan bill affirming the need to overturn Citizens United and examining the effects of unlimited spending on New Hampshire elections. The vote effectively blocks SB 136 from further action until 2017 unless the full House rejects the committee's recommendation and passes the bill when it comes to a vote in January.

While proponents had hoped to receive full support from the committee, the "Interim Study" vote from representatives previously hostile to the measure demonstrates the growing public demand to get money out of politics and leaves the door open to future action. The latest October 2015 Bloomberg poll found that 78 percent of Americans and 80 percent of Republicans want to overturn Citizens United, while only 17 percent support for the ruling. In March, the State Senate approved the measure by unanimous consent.

"Citizens United has been an all-out disaster for democracy," said Betty Tamposi, former Assistant Secretary of State under President Bush and an Open Democracy Advisor. "We teach our kids that the size of your wallet shouldn't determine your standing as a citizen, but thanks to the U.S. Supreme Court and an intransigent Congress, the opposite is true today. We call on the full House to undue the committee recommendation and instruct Congress to overturn Citizens United by passing SB 136 in January."

"There is nothing more destructive of good politics and good policy than secret special interest money in elections," added John Broderick, the former Chief Justice of the NH Supreme Court and an Open Democracy Advisor. "Left unchecked, it will consume our electoral process and silence the voice of the people."

Tamposi, Broderick, and ten other New Hampshire leaders from across the political spectrum are part of Open Democracy, the nonpartisan nonprofit founded by legendary reformer Doris "Granny D" Haddock in 2009. Open Democracy and allied groups have campaigned actively to translate public anger over money-in-politics corruption into positive action for reform, with a special focus on the 2016 presidential primary currently under way. As a result of their efforts, 69 New Hampshire towns have passed warrant articles at town meeting calling for a constitutional amendment to overturn Citizens United and some 12,000 Granite Staters have echoed the call through petitions.

In January 2014 and 2015, hundreds of concerned citizens marched over 200 miles in frigid temperatures across the state to protest big money corruption as part of Open Democracy's NH Rebellion campaign. The Rebellion has led more than a dozen walks and logged 30,000 miles throughout New Hampshire since 2014, with an eye to making money in politics reform the leading issue in the upcoming presidential election. Over 500 citizens rebels have volunteered to question the presidential candidates about reform; the resulting candidate statements and videos are publicly available at www.Questionr.us.

"Recommending interim study is a tacit acknowlegdment of the hundreds of thousands of New Hampshire citizens who want reform, but it is not enough" said Dan Weeks, executive director of Open Democracy and leader of the NH Rebellion. "Our representatives should not hide behind legislative delay tactics – they should take action now to stop the corrupting influence of big money in politics. We hope to see the New Hampshire House reject the committee's recommendation in January, and listen instead to the voices of their constituents."

Wars aren't won overnight and our fight against Big Money politics is no exception. But I'm excited to report that ground is being gained every week here in New Hampshire, as the presidential candidates and state lawmakers respond to our demands for real reform.

First, an urgent request: tomorrow, the NH House Admin Committee will hold a long-awaited vote on SB 136, the bipartisan bill to call on Congress to overturn Citizens United by passing a Constitutional Amendment. Can you spare a few minutes right now to call three Republican state representatives and politely urge that they vote "Ought to Pass" on SB 136?

We also invite you to join us tomorrow, October 13th at 9:30am outside the Legislative Office Building, 33 N State St in Concord to hold signs and greet the committee members as they arrive for the big vote. If the NH House follows the State Senate's lead, which passed SB 136 unanimously in March, we will become the 17th state to call for a Constitutional Amendment and the first with Republican majorities.

Momentum is on our side. Earlier today, Republican presidential candidate Sen. Lindsay Graham spoke to the NH Rebellion and other activists in Manchester and declared that overturning Citizens United"would be a priority for me", as reported by CNN. Ten days ago, Democratic presidential candidate Gov. Martin O'Malley released his ambitious “Restoring Our American Democracy” agenda, incorporating our suggestions for full disclosure, citizen-funded elections, overhauling the FEC, and overturning Citizens United.

Last month, former Secretary of State Hillary Clinton released an ambitious reform agenda of her own embracing our ideas – the first time in my lifetime that a presidential frontrunner has made ending big money corruption a leading cause of the campaign. And that's not to mention the steady drumbeat against big money corruption and crony capitalism from candidates like Bernie Sanders, Lawrence Lessig, Carly Fiorina, and Donald Trump. For all the latest statements and to find an upcoming event where you can Ask the Question directly of a presidential candidate, check out Questionr.us.

Together, we are gaining ground in the fight for representative government where every voice is head. Thanks for all you do.

Open Democracy Index in the News

A Weekend of Democracy in the Monadnock Region

On Saturday, July 18th, friends and fellow rebels will walk from Dublin to Peterborough in honor of Doris "Granny D" Haddock. Will you join us for the 9am walk and 12pm community celebration in Peterborough's Depot Square for free lunch, entertainment, and Ben & Jerry's ice cream?

The six-mile walk is part of our second annual Revive Democracy Weekend in the Monadnock region. The weekend begins Friday night, June 17th, with a screening of the powerful documentary "Pricele$$" at the Peterborough Unitarian Church at 7pm. The film will be followed by a short discussion on money in politics and a social gathering at Harlow's Pub nearby in Peterborough.

On Saturday after the walk and community celebration, our supporters Malcolm and Pamela Peabody will host walkers and friends for a festive gathering at Dublin Lake from 5-7pm. Please contactbeth@opendemocracy.me or call (603) 930-6765 to RSVP.

The weekend will close on Sunday morning when Open Democracy executive director Dan Weeks speaks at the Monadnock Summer Lyceum at 11am at the Peterborough Unitarian Church on "Poor (in) Democracy: How America is Defaulting on Democracy and the Long Walk to Get it Back." All events are free and open to the public.

Thank You to the July 4th NH Rebellion Walkers - and join us Saturday!

On Saturday, July 4th, we donned our patriotic caps and took to the streets once again to declare independence from big money politics and demand the presidential candidates support systemic reform.

Some 150 rebels signed up in advance to make the 20- or 16-mile trek from Rochester or Hampton, arriving in Portsmouth for a festive BBQ and our first Rally for Independence in Prescott Park. There we enjoyed a bipartisan reading of the Declaration of Independence, street theater starring "heroes" of democracy, remarks by NH Rebellion founder Lawrence Lessig, live music, and plenty of free Ben & Jerry's! Although the weather dampened attendance, over 200 patriots in all braved the rain and gave up their holiday to join our Declaration. Check out this short video (more photos and video to follow).

As you may have seen in today's New York Times, a NYT-CBS poll finds 84% of adults "think that money has too much influence in American political campaigns" and similar numbers support limiting the size of campaign contributions, curbing outside spending, and strengthening disclosure requirements. Although 58% of respondents express pessimism that the situation can be improved, that is a marked improvement over the 91% expressing cynicism in our 2013 poll. A summary of the poll's major findings is provided below.
Read more
Add your reaction Share

Fifteen years ago, Granny D concluded her walk across America with these haunting words. Addressing the "brave spirits" of Arlington Cemetery, she asked, "Did you give your lives for a government where we might stand together as free and equal citizens, or did you give your lives so that laws might be sold to the highest bidder, turning this temple of our Fair Republic into a bawdy house where anything and everything is done for a price?”
Read more
Add your reaction Share

Our long walk for democracy continued on Saturday, as nearly 100 citizen rebels took to the streets in the footsteps of Paul Revere on the 240th anniversary of his famous ride, garnering state and national media attention.
Read more
Add your reaction Share

It may not feel like spring, but that isn't keeping the presidential candidates away. Already, they're out on the stump talking up a storm about taxes and teachers, energy and immigration, deficits and drones… We need to make sure they address the underlying issue: how to end the corrupting influence of money in politics.

That's where you come in, as walkers and talkers for reform! 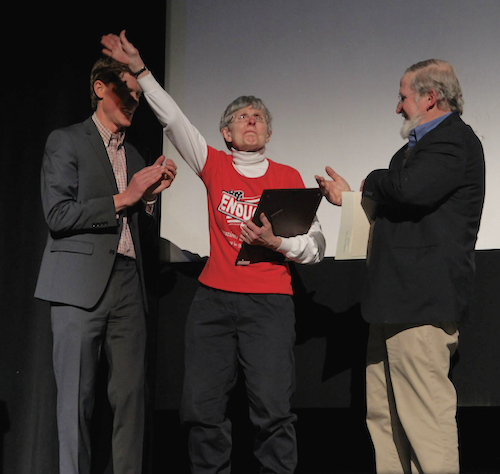 Movements are made up of people. Movements grow when people invest their time, energy, passion, creativity, and resources to further the cause. Countless people have contributed to building the Open Democracy movement in New Hampshire (and beyond!) and this year we are proud to recognize six such individuals with the first-ever 'Walk the Talk' Awards. To learn more about the Awards recipients, check out our press release below.